This pita bread recipe is a perfect healthy snack for the entire family to enjoy. It’s easy enough to make in just 5 minutes, and it has simple ingredients that you probably already have on hand! The dough is mixed together using your hands before being formed into balls and baked until golden brown. This recipe makes 6-8 servings of 2 pita pockets each.

Pita bread is a popular type of bread that’s typically eaten in the Middle East. This recipe for pita bread is easy to make and can be made with other types of dough as well. 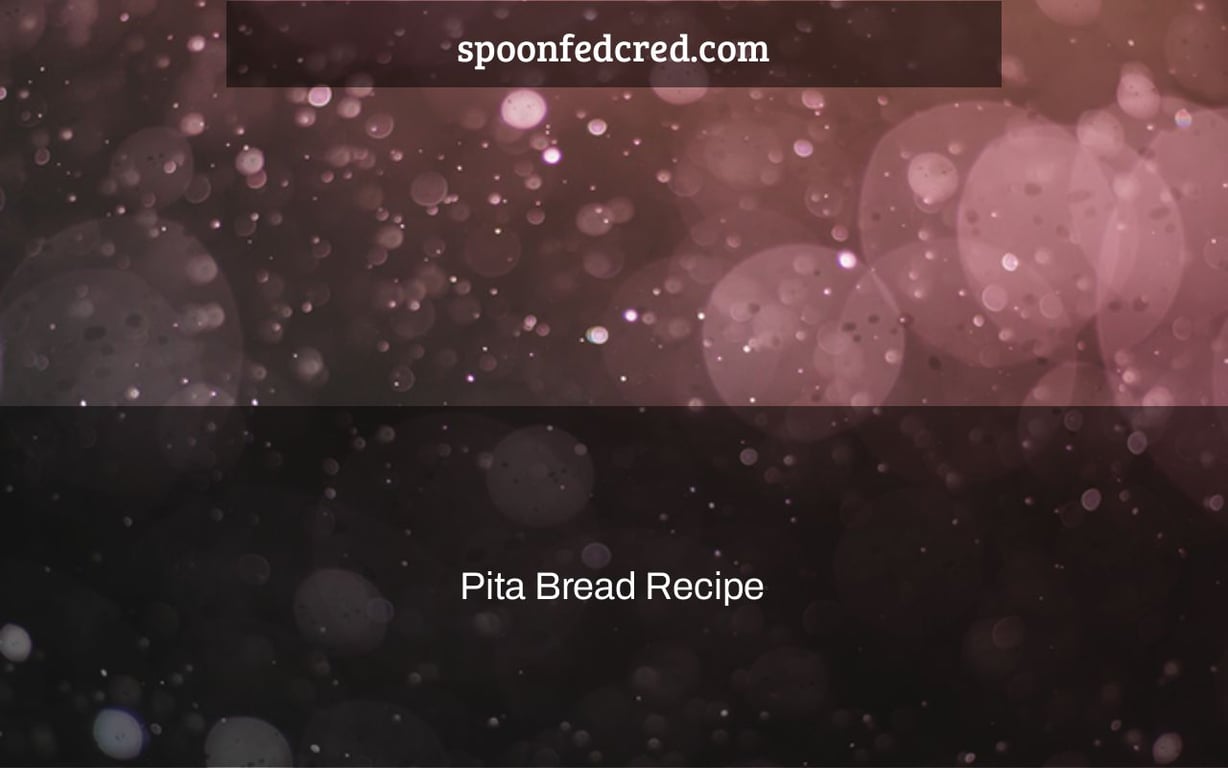 Look no farther than this recipe if you’re looking for the simplest method to make pita bread at home. Pita bread, often known as pita in British English, is a soft, fluffy yeast-leavened spherical flatbread from the Middle East and Mediterranean region.

It’s a million times better than anything you’ll get at the grocery, and it’s also really simple to prepare. This warm, aromatic pita bread recipe just requires a few ingredients: sugar, olive oil, salt, wheat flour, all-purpose flour, warm water, and dried yeast. Simply make the dough, let it rise, and bake it till puffy and golden brown on the stovetop or in the oven.

Pita bread is a tasty Mediterranean favorite with pockets that are perfect for creating sandwiches, tiny pizzas, or toasting and dipping in hummus. Nothing tops this pita bread for a fast and simple bread recipe.

In any case, pita is not to be confused with Indian naan bread. Although they have a similar look due to the fact that they are both flatbreads, naan bread is often fluffier due to the addition of yogurt to the ingredients.

What are the requirements for producing Pita Bread?

A stand mixer is useful for making the simplest homemade pitas. Although you may knead the dough by hand, using a stand mixer drastically reduces the time it takes to handle the dough.

The pitas should be cooked in a cast-iron skillet, but any big pan would suffice.

It’s not as difficult as you would think to make pita bread at home. In a small dish, combine warm water, sugar, and yeast, and let aside for at least ten minutes.

When the mixture is foamy, add the flour, olive oil, and salt, then mix everything together and knead on a dusted counter until you have a nice ball of dough. Cover and let aside for at least 2 hours, or until the dough has doubled in size. At this stage, split the dough into 8 equal-sized balls, let aside for half an hour, and then flatten with a rolling pin to approximately 1/4′′ thick. Allow for another ten minutes of resting time, then bake the pita bread for 2-3 minutes each side in a hot pan with oil, or until golden brown.

The pita bread will stay puffy for a short time after being cooked and taken from the oven, but it will keep its pocket so you may fill it with your favorite contents.

Is it possible to bake pita bread?

You may alternatively bake the pita bread at 475°F in a preheated oven. Place the pita pieces on a baking sheet on the center rack and bake for 2 minutes each side, or until they bubble up.

Is it possible to prepare the pita bread ahead of time?

Yes! Allow the pita bread dough to rise before refrigerating it until ready to use. The dough may keep up to a week if properly stored.

Why isn’t my pita bread puffing up?

Check to see whether your ingredients are fresh if your pita bread didn’t puff up when cooking. Remember to flour your worktop and prepare your cast-iron pan or oven before kneading.

What to put on Pita Bread

Use your freshly baked pita bread to make excellent sandwiches — pita pockets can be filled with almost anything. Whatever you want: roasted vegetables and cheese, healthy tuna salad, grilled chicken, kofta kebabs, beans, personal small pizzas — whatever you want!

Pita may also be eaten with hummus, tzatziki, guacamole, or souvlaki as a dipping sauce.

If you don’t have whole wheat flour, 3 cups all-purpose flour will suffice.

The pita dough will cook without a pocket if you make it thicker. Moroccans enjoy this thicker bread dipped in a hot buttery honey syrup.

If the dough isn’t pulling away from the sides of the bowl, add another 14 cup of flour. If necessary, add extra.

You may let the dough rise in your chilly oven while the light is turned on.

To measure out the dough into equal pieces, use a kitchen scale.

What is the best way to keep homemade pita bread?

While fresh out of the pan pita bread is wonderful, you may chill it and keep it in an airtight jar at room temperature for 3-5 days.

Is it possible to freeze Pita Bread?

Yes! Pita bread may be frozen for up to three months. Make sure the pitas are sealed in zip-top bags and that wax paper is layered between each one. Reheat frozen pita in a medium-hot oven before serving.

In the bowl of your stand mixer, combine the water, sugar, yeast, and wheat flour. Whisk everything together and let aside for 10 to 15 minutes, or until frothy.

In the bowl of your stand mixer, combine the water, sugar, yeast, and wheat flour. Whisk everything together and let aside for 10 to 15 minutes, or until frothy.

Toss together the olive oil, all-purpose flour, and salt in a mixing bowl.

On low, combine the ingredients until the dough pulls cleanly away from the bowl’s side. Knead the dough for another 5 minutes. Dust a work surface lightly with flour, then turn out the dough and roll it into a ball.

Toss together the olive oil, all-purpose flour, and salt in a mixing bowl.

In a lightly greased bowl, place the dough.

Cover the dough and place it in a warm place for approximately 2 hours to double in size.

On low, combine the ingredients until the dough pulls cleanly away from the bowl’s side. Knead the dough for another 5 minutes. Dust a work surface lightly with flour, then turn out the dough and roll it into a ball.

Turn the dough out onto a floured surface after it has doubled in size.

Form into a ball, then cut into eight equal pieces.

In a lightly greased bowl, place the dough.

Make a ball out of each piece of dough.

Then rest for 30 minutes under a clean damp cloth.

Cover the dough and place it in a warm place for approximately 2 hours to double in size.

Roll the dough balls into 1/4-inch-thick flat pitas using a rolling pin. Cover and let aside for 10 to 20 minutes to allow flavors to meld.

In a cast-iron skillet, heat the oil over medium-high heat. Pitas should be cooked for 2 to 3 minutes on each side.

Turn the dough out onto a floured surface after it has doubled in size.

Wait for them to puff up and brown.

Serve and have fun!

The “arabic pita bread recipe” is a traditional Middle Eastern flatbread that is traditionally baked in an oven. It’s made with flour, water, yeast, and salt.