A sticky, sweet pudding made from caramelized milk that is used to make traditional desserts like flan and tres leches cake. Learn how you can make your own dulce de leche at home with this easy recipe.

Dulce de Leche is a caramel-like sweet made with milk and sugar that’s used in many Latin American desserts. This recipe for Dulce de Leche cake makes a moist, rich cake that can be enjoyed any time of the year. 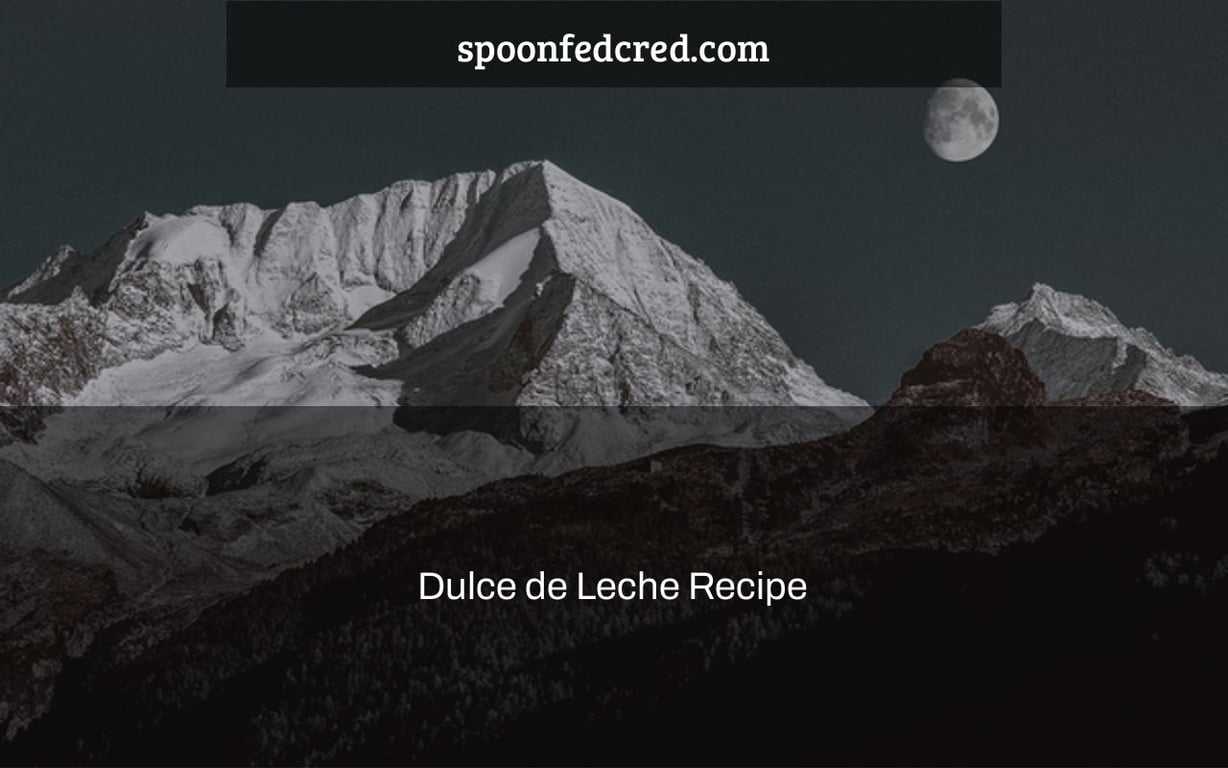 You’ll adore dulce de leche if you like caramel. This deliciously sweet and adaptable sauce is produced by caramelizing milk instead of sugar. In Latin American nations, it’s a common dessert component.

Dulce de leche has a deep brown hue and a sweet, almost toffee-like taste. It’s also known as milk jam or caramelized milk in English or manjar, arequipe, or manjar blanco in Spanish. It’s thick, rich, sticky, and smooth, making it ideal for use in cakes, cupcakes, doughnuts, and cookies, as well as drizzled over ice cream.

We’ll go through both methods for making homemade dulce de leche in this article. Let’s get started!

What is the meaning of dulce de leche?

Dulce de leche is a thick, creamy caramelized milk spread or sauce. It’s popular in Latin America, where it’s used as a topping or filling for a variety of sweet treats.

dulce de leche means “sweet milk” in Spanish. It’s created by gradually heating milk and sugar, with the addition of extra Ingredients like vanilla on occasion.

Dulce de leche may be found all across Latin America, but particularly in South America. There are several legends regarding its beginnings. According to one version, it was accidentally manufactured in Argentina when an Argentine politician’s maid forgot about a pot of milk and sugar on the stove.

Another theory claims that this delectable treat originated in Indonesia and made its way to the Philippines, where it was discovered by the Spanish during their colonization of the nation. They were so enamored with it that they brought it with them when they invaded Central and South America.

Caramel vs. Dulce of Leche

There are a few fundamental distinctions between dulce de leche and caramel, despite their similarities. Caramel is produced with sugar and water or just sugar boiled down, while dulce de leche is created with sweetened condensed milk (although it can also be made from milk and sugar). Dulce de leche is caramelized at a lower temperature. The darkening of the milk gives it its rich, beautiful color.

You’ll either need one or four Ingredients, depending on the technique you choose to prepare dulce de leche.

Whole milk, sugar, baking soda, and vanilla are required for the original procedure.

Dulce de Leche: How to Make It

This is the less difficult of the two options. Preheat the oven to 425 degrees Fahrenheit. Fill a pie plate halfway with condensed milk, then cover with foil. Make sure the foil is well sealed. Place the pie dish in a large roasting pan and fill it halfway with boiling water. It should come halfway up the pie dish’s side.

Start by combining the milk, sugar, and baking soda in a saucepan to create dulce de leche the old-fashioned method. Bring to a boil, then reduce to a low heat. Make sure the milk mixture is stirred often.

Simmer the milk for 12 to 14 hours, or until it has thickened and browned. Pour in the vanilla extract and let aside to cool fully.

Dulce de leche may be used to make a variety of delicious sweets. Use it in cakes, doughnuts, truffles, or crepes as a filling. It works well as a topping for pancakes or waffles, or as a caramel alternative. It’s also delicious poured over your favorite ice cream.

Instead of cow’s milk, use goat’s milk to produce cajeta.

A pressure cooker may be used to prepare dulce de leche. In your Instant Pot’s trivet, place the can of condensed milk. Make sure it doesn’t come into contact with the edges. Fill the can halfway with water and close the top. Cook for 15 minutes on high, then let cool naturally. Allow the can to cool entirely in the Instant Pot over night.

To thicken dulce de leche, create a slurry with 12 tablespoon cornstarch and 14 teaspoon milk, then incorporate it into the mixture. Milk powder may also be used.

for the Method with Sweetened Condensed Milk

In a saucepan, combine the milk, sugar, and baking soda. Bring the mixture to a boil, then reduce to a low heat.

Allow the milk to boil for 12 to 14 hours, stirring regularly, or until thickened and browned.

Pour into a basin and set aside to cool fully.

Use right away or transfer to a clean jar and store in the refrigerator.

Preheat the oven to 425 degrees Fahrenheit. Fill a pie plate halfway with condensed milk, then cover with foil.

Place the pie dish in a large roasting pan and add enough boiling water to fill the pan halfway up the edge of the pie dish.

45 minutes in the oven

Add additional water if necessary, then bake for another 45 minutes, or until the condensed milk is thick and golden.

Remove from oven and let to cool fully before using or transferring to a clean jar and refrigerating.

For the best results when using the The Traditional Approach, use whole milk.

Dulce de Leche is a sweetened milk that is made by caramelizing sugar and then simmering it with milk. It’s often used in desserts like tres leches cake or key lime pie. Reference: where to buy dulce de leche.

Too Much Pepper? Simple Tips To Save Your Dish